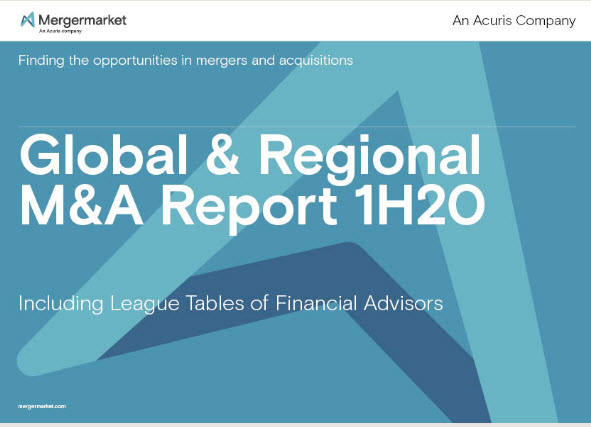 London, United Kingdom, 3 July 2020: Mergermarket, the leading provider of M&A data and intelligence, has released its 1H20 report with league tables. According to the new research, the initial effects of COVID-19 were only beginning to be felt across the global economy at the end of 1Q20. However, its full impact manifested in the second quarter, where deal volume nearly halved from 4,308 deals in 1Q20 to 2,630 in 2Q20 and deal values plummeted from USD 592.6bn in 1Q20 to USD 308.9bn in 2Q20.

To see the differences between COVID-19 and the Global Financial Crisis, one need look no further than the second top performing sector of 1H20—Financial Services. Even accounting for a sizable fall in deal count, the Financial Services sector more than doubled its global market share to 17.1%. Six of the largest financial services transactions announced in 1H20 are investing or banking related, including Morgan Stanley’s USD 13bn bid for ETrade Financial, Kuwait Finance House’s USD 9.8bn offer for Ahli United Bank, and Franklin Resources USD 5.4bn bid for Legg Mason. Meanwhile, Aon [NYSE:AON]’s USD 35.6bn plan to merge with Willis Towers Watson [NASDAQ:WLTW] is an example of one the few large transactions that has managed to move forward.

Technology, Media and Telecom (TMT) also increased their relative share of global M&A, as businesses became virtual and consumers were driven online. Sectors such as Consumer and Leisure have been impacted, falling a combined 64.3% by value and 66.1% by deal count year of year, and Energy, Mining & Utilities was hit hard (declining 67.6% in value and 33.9% in volume) as commodities reacted negatively when energy demand dried up. Construction was the only sector to turn in a positive number achieving a 5.7% increase in deal value despite a one-third decline deal volume.

Mark Druskoff, Data-Driven Content Coordinator at Mergermarket commented: “Going into 2Q20, we expected private equity to remain active even during the uncertainty. And sponsors didn’t disappoint. Despite experiencing a more severe drop compared to the Global Financial Crisis, private equity still managed to achieve its highest market share of total global M&A (19%) by volume since 2005 because the broader market experienced steeper declines. And PE had an even higher share of mid-market transactions.”

M&A intelligence, data and research. In M&A, information is the most valuable currency. Mergermarket, an Acuris company, reports on deals 6-24 months before they become public knowledge, giving our subscribers a powerful competitive advantage. With the largest network of dedicated M&A journalists and analysts, Mergermarket offers the most comprehensive M&A intelligence service available today. Our reporters are based in 67 locations across the Americas, Europe, Asia-Pacific, the Middle East and Africa. Visit mergermarket.com.