Finding Opportunities in Mergers and Acquisitions 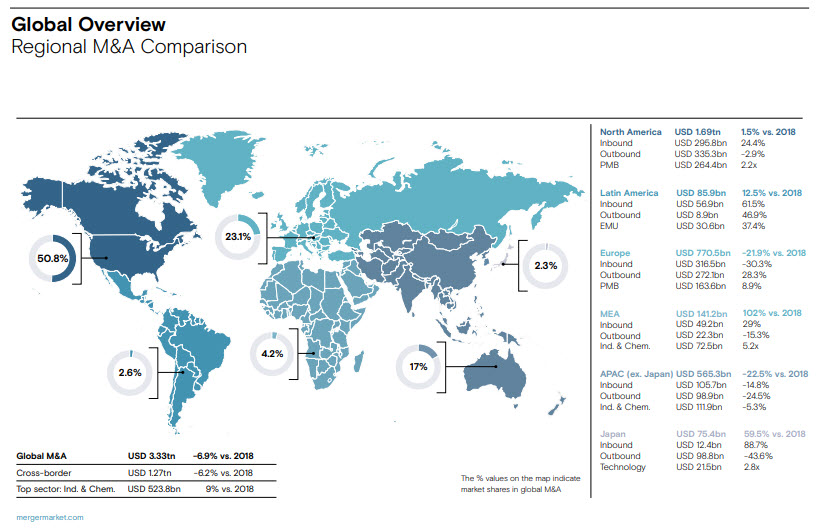 Mergermarket, an Acuris company, has released its Global M&A roundup for 2019, including its financial advisors league tables. Take a look at the report HERE and don’t forget to review the charts breaking down the activity by sector, value, year-to-year analysis, etc.

A couple key findings include:

• The M&A market in the United States was a tale of two halves in 2019, with record activity levels in 1H19 offset by lackluster figures in the second half. Overall, the US continued to show resiliency amid the global M&A slowdown in 2019 and picked up to 47.2% market share of global deal activity by value, up from 43.3% in 2018

• Led by the year’s second-largest deal, Bristol-Myers Squibb’s USD 87.8bn acquisition of rival Celgene in January, deal making in the Pharma, Medical and Biotechnology (PMB) sector almost doubled by value to USD 234.2bn across 519 deals in 2019 despite a stark decrease by count compared to 2018 (705 deals worth USD 117.4bn)

• The US PMB sector in 2019 was shaped by mega deals (>USD 10bn), with five announced over the year, worth a combined USD 158bn. Activity in the space is expected to keep up its current pace in 2020, driven by both strategic acquirors and private equity firms sitting on record amounts of dry powder