Sell-Side Success: It Isn't Just About the Purchase Premium

On paper at least, maximizing financial proceeds to the selling company's owners and shareholders— a commonsense criteria for determining the seller’s degree of M&A success and effectiveness--is straightforward.

First, identify those pursuers most likely to overpay, based on three characteristics of those would-be acquirers: industry-segment similarity to the target, capacity or other voids, and/or the buyer's degree of desperation—their urgency to get a deal done now.

Next, calibrate the number of capable bidders with the number and timing of bid cycles. The aim is to maximize the purchase premium: the percentage of the bid amount over the pre-announcement market (share) value of the target. 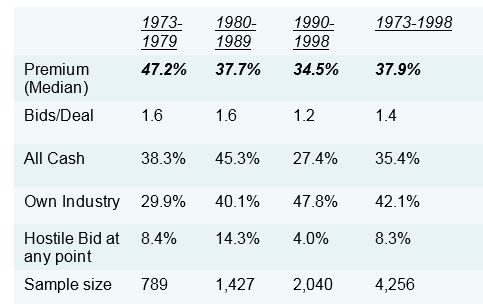 So the sequence above ensures maximum financial returns for the selling firm’s shareholders?

Er, not exactly. Those steps help ensure the highest offer price possible as of the time of sale, but that is not necessarily always the same thing as maximizing selling value.

The difference? Consider the following situations:

But say, while a ‘sweet spot’ acquisition purchase premium (APP) over market in the 40-50 percent range is often sufficient to satisfy both sides in the transaction, that does not mean maximum—or even similar proceeds to the shareholders of the just sold firm.

A 45% APP results in completely different sales proceed when applied to the cheap early cycle target as contrasted to when that percentage APP is directed at the end-of-boom era target company with a share price has been risen over five years with the resurgent recovery.

Or when applied to the company viewed today an exemplar for others to follow as contrasted with yesteryear’s champion: a crippled has-been of a firm, hoping against hope on for a miracle that never comes.

Or between a company put up for sale in the early stages of corporate value life cycle-- when the best days still appear to be in the future, as contrasted with the fully mature company with a business model that is now suspect.

It is only when these additional considerations are reflected in the calibrated, pre-planned strategy of the value-maximizing selling firm that the sales sequence also promises to achieve—or at least approach—maximum proceeds for the owners of the selling firm.

About the Author:  Peter J. Clark is a management consultant and company advisor with his own international firm. He is also Senior Teaching Fellow at University College London with the Department of Management Science and Innovation, where he teaches finance and M&A. Peter has more than 20 years' experience in M&A including target search, bid-sale advisory and merger divestiture strategy, involving more than $3bn in transactions. He is also co-author (along with Roger Mills) of Masterminding the Deal: Breakthroughs in M&A Strategy and Analysis (published by Kogan Page).